Note: Scroll to the bottom recipe heading if you don't have time to read the nutritional segment. 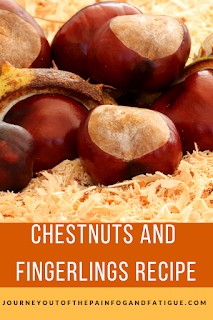 Last week, I was out shopping for the family at Costco, and as I was waiting for the rain to die down, I spotted some chestnuts at a discounted price. I've never made chestnuts, but I had nowhere else to go with the sudden downpour, and since I'm working on eating cleaner and homecooking most of my meals, I decided to research its nutritional value and found some interesting healthy nutrients in these little suckers.

I've been asked what type of diet I'm doing, and at almost fifty, over the years, I can confirm that I’ve seen fad diets come and go. I've tried everything from vegetarian, to Atkins, to carb only diets and while some worked great while I was on them, others with carbohydrate restrictions left my kidneys aching terribly, while vegetarian diets depleted me of strength, and left me with low iron deficiencies. What was once bad, like eggs and butter, is now good and vice versa. I’ve come to understand that the only thing I can listen to is my body’s own responses to the foods I eat. This is not to say that vegetarian diets or protein only diets don't work, they simply don't work for me. I firmly believe that we are all uniquely made and as the study of epigenetics begins to unravel, since it's still at its early stages, I predict that we will find in the years to come that some people can metabolize certain foods better than others. If you haven't heard of epigenetics, that is the study of how your genes are expressed based on the type of lifestyle choices you make. If you haven't read the book by Dr. Ben Lynch, titled, "Dirty Genes," he details the main types of genes that cause the most problems and offers solutions to help people identify the appropriate foods and nutrients needed to live a healthier lifestyle.¹ I highly recommmend it. You can read my review of his book, here.

Since I struggle to detoxify and methylate my body, I find that the more I avoid foods laden with chemicals and gluten, the better I feel. If you've heard of the "Fat-burning Man," Abel James, and author of the Wild diet, his philosophy is to eat foods as your grandparents would have eaten them, avoiding heavily processed foods and choosing gamey proteins, fruits,vegetables, along with moderate natural forms of organic milk and butter.² That's basically how I aim to live. For me, I want a lifestyle, not a fad diet. I’ve learned that it’s best to eat foods in moderation and to be conscious of not overeating. I won’t cut carbs, but I’m limiting the amount of carb loading that I do, and as I explained on previous posts, I do best at lifting brain fog, when I avoid gluten or high starch foods. Which is why, when cooking potatoes, I started soaking them in water. Potatoes are high in carbohydrates, but you can reduce their carbohydrate content by removing the starch that is in them.

In the recipe below, fingerling potatoes generally don't have as much starch as Russet 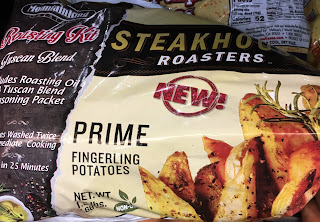 potatoes, but I soaked them anyway to help remove the starch it had. I do want to mention something about the fingerling potatoes. It came with a prepackaged marinade that I ended up tossing in the trash. I made my own out of my herb garden, and here's why: It contained soybean oil. I've recently become almost militant about reading my food labels. Back in the 90's, soymilk became very popular to drink, and that's all I drank. I don't recall when the no hormones, no antibiotics phase kicked in, but I could not tolerate milk. The internet was still a baby back then, so there wasn't much information out there by holistic doctors warning you about the potential pitfalls of consuming processed soy. Television commercials pushed it as a healthier alternative, and I simply followed the herd and jumped on the soy bandwagon, sigh. 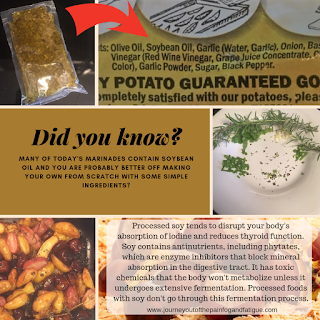 Processed soy tends to disrupt your body's absorption of iodine and reduces thyroid function. I don't want to say that soy caused my sluggish thyroid, because other factors have contributed to it, but I'm sure it didn't help. You see, soy contains antinutrients, including phytates, which are enzyme inhibitors that block mineral absorption in the digestive tract. It has toxic chemicals that the body won't metabolize unless it undergoes extensive fermentation. Processed foods with soy don't go through this fermentation process. If you're going to eat soy, it is recommended to go organic and eat the traditional fermented foods such as miso, tempeh, or natural soy sauce which is called tamari.³

Regarding chestnuts, they are high in nutritional value. Although high in carbohydrates, they are complex, which means that you won't get the spike in energy that is followed by a fast dip from simple carbs. Not only are they high in fiber, they are also lower in fat than other nuts and high in manganese, which aids with connective tissue, bones, blood-clotting factors, sex hormones, fat and carbohydrate metabolism, calcium absorption, and blood sugar regulation. It is also important for normal brain and nerve function. I also love that they are also high in folate, since I need to eat more foods rich in folate.⁴

The package came with four 5.2 oz bags. They're pre-roasted and peeled, so that helps 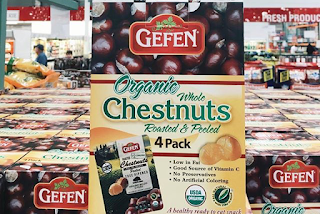 save some roasting time. Apparently, you can use them for baking, stuffing, soups, toppings, and desserts- ooo, yes, desserts- I think that will be my next try. If it comes out tasty, I'll be sure to add it to this post.  The one thing I learned about chestnuts, aside from the fact that they are not very tasty straight from the bag- don't ask- is that if you overcook them, they'll come out dry and hard to chew. How do I know?  I cooked mine for about 45 minutes with the fingerling potatoes. Keep in mind that some ovens will cook differently than others, so yours may not take as long to roast with the potatoes. When my teen got home, I had just pulled them out of the oven. She ate the meal, and I had a small taste.They were delicious. Best way I can describe the taste is woodsy, with a sweet potato texture. By the way, if you don't think you're going to like the taste, you can still make this recipe with just the fingerling potatoes. You just won't get the nutritional benefits that come from eating the chestnuts.

So, I was in a mad dash to make it to my cardio bag class, and instead of putting the disha away, I stuck it back in the oven, thinking I was outsmarting the cat from a potential snack. Felix gets into everything if we leave it out, especially when it's a glass filled with water. To the family cat, I swear the glass is a puck, and his paw is a hockey stick; the dog, a spectating cheerleader egging him on, grr! My cat can be a little jerk, sometimes, but I love that crazy psycho.

Anyway, I hadn't realized the oven was still warm, although I had turned it off, and well, they ended up dry and chewy by the time we got home. Still tasty, but it had the texture of beef jerky- ha! So, lesson learned: keep an eye on the chestnuts as you are baking them, so you don't overcook them, unless of course, you prefer the texture of beef jerky, then go crazy!

I hope you enjoy this side dish, and if you have any links to share regarding chestnut recipes, feel free to include them below. Also, it you liked reading this blog and would like to get notified when a new post goes live, click the subscribe button located on the top right-hand corner. Till next time!

Recipe for Fingerlings with Chestnuts

1 small sack of fingerling potatoes (2 lbs.)
1 5.2 oz bag of chestnuts Gefen brand (organic whole nuts)
1/2- 1 tsp kosher salt (season to your salt preference, the herbs in the marinade are what give the recipe its flavor
1/4 tsp pepper 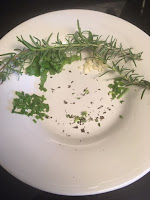 pinch of lemon thyme about 1/8 of a tsp (you can also use regular dried thyme if you can't find it fresh.)
1/2 tsp of fresh chopped chives
3 fresh chopped basil leaves
2 diced garlic cloves
1 cup of virgin olive oil 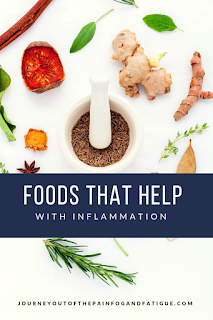 Foods that Help with Inflammation